I am so excited to tell you that the dates for Valor Tours- 2017 Battle of the Aleutians trip has just been announced! Next year is a very special year as it marks the 75th Anniversary of the bombing of Dutch Harbor, Unalaksa which began the Aleutian Campaign. We would love for you to join us for, a once in a lifetime chance- historical tour though the battlegrounds of the Aleutians!    Due to the remoteness of this trip, limited space if available so if you are interested please make sure to call and reserve your spot!

I will also ask you to take just a moment to share this with anyone who is interested in WW2 history- you never know who will want to hop on board!  Also post it to Facebook,Twitter, Google... to help us spread the word!  Hope you see you next year! 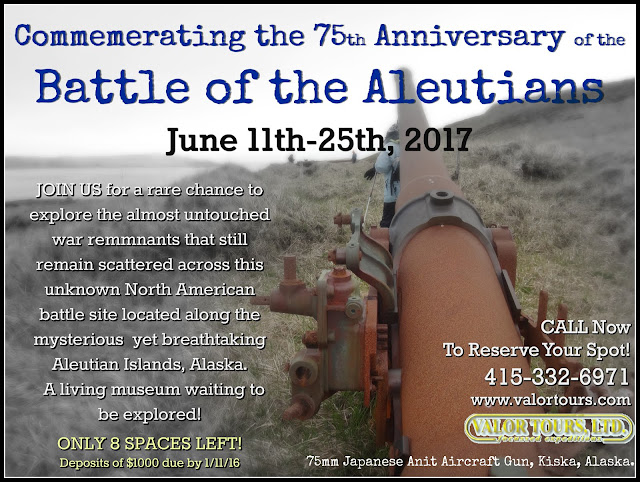 If you have any questions about the trip, feel free to contact me or Vicky at Valor Tours- info@valortours.com.   Also watch my blog as I will be posting highlights from the 2016 trip.

The Other Forgotten Story

Before I begin to recount to you the incredible and most memorable experience I had following in my grandfathers footsteps through the forgotten battlegrounds of the Aleutian Islands in June, I think it is important to start at the beginning, and for me, the story of WW2 in Alaska begins before any bombs were dropped.  It begins with the peaceful culture of the people who called the Aleutian Islands their home prior to the Japanese attack on June 3 & 4th, 1942.    What people may not realize is that many of these islands were inhabited by the most resourceful of resourceful a populous. A humble, simple and happy folk- the Aleuts.

When the invasion happened and the U.S. troops moved in to defend the land, the native peoples along the chain were forced to leave the only place they called home disputably "for their own protection".  Sadly, like so many others along the Western edge of the continent, they were forced into despicable, inhumane internment camps to wait out the war, with most of them never to see the only homeland they have ever known again.

This topic creates such conflict within me because as a Canadian, I am familiar with and can definitely empathize with the struggles of the First Nations populations historically.  It is something I grew up learning about and respecting.   It presented an interesting dichotomy that I struggled with while on the boat. On the one hand,I was on this trip to honor, and in a way celebrate, not just my grandfather, but all who served up in these remote islands.  But on the other hand, I also found myself feeling remorseful and thinking a lot about what happened to those gentle peoples and their beloved homelands.  And how do you celebrate that?


History is history and the reality is, that this was a battle we could not avoid.   Without a doubt, we had to go and defend ourselves.  Most definitely things could have been handled differently. No doubt. But hindsight is 20/20. Hindsight is also an essential part of the learning process. Those gross misjudgements are a fundamental piece of how we all, hopefully, learn for the future.    The key now and for generations to come is to continue to learn and evolve from the people who came before us, albeit in their good judgements or poor, while at the same time,  honoring their place in history.
This is what I am hoping to do by beginning with this post.  To bring honor and recognition to another group of people who deserve our sincerest gratitude and apologies for the sacrifices they incurred during the bloody Aleutians.

Qaĝaasakung- thank you in Unangan (Aleut).


Aleut Story from SprocketHeads on Vimeo.
Posted by Karen A. at 2:36 PM 1 comment: