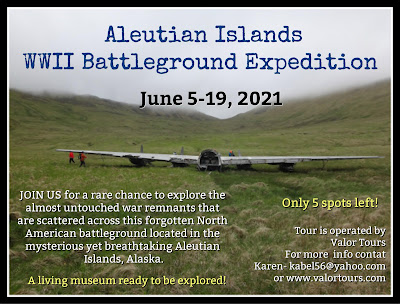 The 2021 trip has been postponed to June of 2022 due to COVID-19.
2022 will have TWO separate expeditions to choose from:  June 4-18th leaving from Adak and ending in Dutch Harbor or June 18th-July 2nd, 2022 leaving from Dutch Harbor and ending in Adak.
While most World War II theaters of operation are well understood, very little is known about the Aleutian Campaign and the Kurils Island Operations that followed.

These remote islands off the west coast of Alaska were the scene to the only carrier and land based bombing of North American targets in history, and the only time since the War of 1812 that a foreign power had occupied American soil on the continent.

This historical tour offers a unique opportunity to visit these seldom seen places. They are not your typical well manicured Civil War and European battlefields, but sites that have retained their natural settings and artifacts of war; a living museum.  The tour also affords an opportunity to visit the exquisite beauty of the Aleutians islands, go ashore, and experience a part of the world that very few ever will- A trip of a lifetime!


HISTORY
The campaign began when the Japanese Imperial Navy bombed Dutch Harbor, Alaska June 3rd and 4th, 1942 and subsequently went ashore and occupied two of the westernmost Aleutian Islands, Kiska and Attu.   What followed was a 13 month offensive, primarily by air, to remove the Japanese from these remote islands.  Successfully in May 1943, after the second deadliest battles in all of the Pacific Theater; the Battle of Attu, Allies re-gained control and by August 1943 the first part of the campaign was over.  What started next was two years of US bombing missions from Attu, over the Japanese coastal island of Paramashuro in an effort to weaken the Japanese strong hold.


OTHER POINTS OF INTEREST

$8,000 per person*.
Includes all meals- and our chef is amazing, a one night stay in the Grand Aleutian Hotel,  all tours (excluding tips), and two airfares (Anchorage- Adak and Dutch Harbor- Anchorage). **You will be responsible for getting yourself to and from Anchorage (ANC) at the beginning and end of the trip**

(Tip- Alaska Airline miles goes A LONG way up in the Aleutians so if you don't have the card yet- I HIGHLY recommend it. You can use your miles to get your own ticket to Adak or home from Dutch Harbor!!)

** NOTE- We will be going into a remote, seldom visited part of the United States.  It is an expedition not a luxury tour.  There are no major medical facilities west of Unalaska and no active airfields west of Adak.  It is a PHYSICAL trip.  We will be walking for many miles in mountainous unkempt territory with a good chance of inclement weather.  You must be amble and in good shape.**