Normally,  when Canadian Thanksgiving rolls around,  I am on some softball park sweating every once of fluid I have out of my body while I watch my daughter play softball.  But not this year....  This year, for the first time in close to a decade, I had the chance to celebrate Canadian Thanksgiving, albeit still sweating, but this time over my stove while preparing a traditional feast for a group of people I am most thankful for.   My Floridian neighbors who watch my house while I am traveling around the country in the pursuit of history and for a mom and her family who seamlessly step up to fill my shoes for Aly when needed.  What would I do without these people?

Whether they wanted it or not,  having them in the house became a history lesson.  The photos, planes and war memorabilia that decorate my dining room inspired them to ask questions which gives me a chance to tell them the story of a group of brave unknown servicemen who stepped up for our freedom in a barren and lonely place that so few know about.   Believe me, the pleasure was all mine... if they hadn't left, I'd still be talking... smile.


Let's take a look at what the 111(F) Squadron, RCAF and the rest of the folks at Fort Glenn on Umank were doing October 8th, 1942.   Not celebrating Canadian Thanksgiving that is for sure...  Take a look. 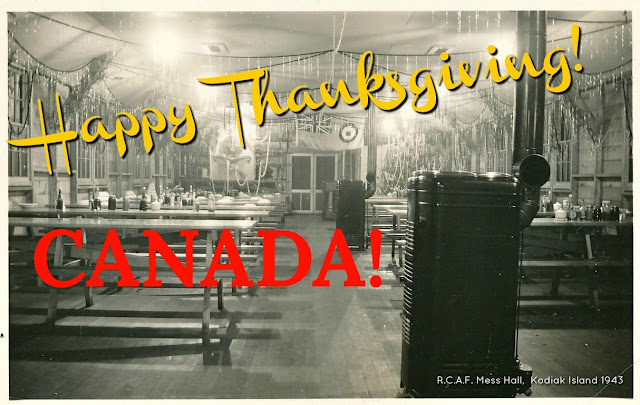 Keep in mind, at this time, half the Canadian squadron had been at Fort Glen for three months and attached to the Army Air Corps while the other half remained on duty at Elmendof.  Therefore you will see two separate entries, one from the group at Elmendorf and the other from Umank.  At this time, Canadian airmen made up roughly one third of the air strength in the Aleutians.

LAC Ward, H.D. Fabric Worker, became an acting Corporal (unpaid). Sergant Wise, L. was discharged from Post Hospital. A large portion of our squadron that is at Elmendorf received Typhoid shots. The first word of the pending movement of our pending squadron to Kodiak. A Signal was sent to Umnak for all personal of No. 111 (F) Squadron to return to Elmendorf as soon as possible. Flying time total was 5:10hrs.
UMNAK

Pilot Officer O.J. Eskil and Flight Sergent Stusiak and Skelly on patrol today.  Weather poor. Signal received from Elmendorf notifying us to return to Elmendorf as soon as possible. Everyone busy arranging for quick move. Signal sent to Fireplace for flying officers Gohl and Lynch, and pilot officer Gooding to return immediately. The pilots of the Army Air Corps 11th Pursuit Squadron came over and paid us a visit of "Congratulations" on the **Kiska Mission. The books for our Umnak Detachment Library, so kindly donated by the American Red Cross, were turned over to the 11th Pursuit Squadron, U.S. Army Air Corps. Flying Officers Gohl and Lynch and Pilot Officer Gooding arrived from *Fireplace at 17:15 hours. Flying time total 7:00hrs.

*Fireplace was the Canadian code name for the base on Adak.
**The Kiska Mission is the first offensive mission the Canadians saw in Alaska.  On September 25th, 1942,  four RCAF Pilots: P/O Lynch, P/O Gooding, P/O Gohl and S/L Boomer, were chosen to fly with the 11th Pursuit's,  343rd Squadron on a escorted bombing mission over Japanese occupied Kiska Island.  The mission was a success.  Many targets were destroyed as well as the take down of two enemy rufes.  RCAF S/L Boomer credited with one of them and Maj. Jack Chennault, son of Brig. Gen. Claire Chennault, claiming the second.  S/L Boomer's take down will forever be in history as the only RCAF victory in the Pacific Theater.  Before arriving in the Aleutians, the Canadian Squadron Leader also had victories in the skies over Europe.  Read more about the Aleutian mission here.