One Hell Of A Layover...

How fitting as I finish the last post of my first trip to Anchorage on the first day of my second trip....

I left Kodiak the next morning with contentment and excited to one day return,  for there are still things left to be done there.  As I sat in the airport I wondered where that comforting twelve year old, Kya, was?   And who was going to distract me on the flight back to Anchorage?  It was looking as though I would have to put on my big girl pants and just suck it up.  Well, so I thought...  Entering the plane was this ruggedly handsome young man who requested to sit beside me.  Apparently, he had been sitting behind me on the way over to Kodiak. Happily, he entertained me the entire trip, but mostly by randomly shrieking "Oh no!", "What is that noise?' and "Uh Oh...".  Obviously,  he had noticed my previous apprehension and found great pleasure in making light of it.  Good thing I don't take things too seriously.  It made me smile.

Before I knew it, we were on the tarmac in Anchorage and I was on my way to find my future shipmate Allison.  As shipmates go, Allison is top notch. She is always smiling and positive, no fear, politely says what she thinks, is organized and well informed.  My kind of human.  And while I was busy exploring the history of WW2 in Kodiak, Allison was successfully scouting out Merrill Field, Anchorage's first airport, now commercial airport, for of one of only three airworthy WW2 Japanese Zero fighter planes that temporarily, call this Alaskan air  field home.

There, lined up along the taxi way were two Harvards, one decked out in a showy Canadian color scheme and the other as an American Texan T-6,  one of Alaska Airlines very first planes, and an infamous Japanese Zero.  We walked circles around the planes drooling.. or maybe that was just me. Probably just me. I couldn't help it,  these old warbirds were sitting pretty in pristine condition and proudly basking in the Alaskan sun.  After several laps,  we finally ventured into the open hanger, where Mike, the flight mechanic, was working on the brakes of yet another Texan.  We introduced ourselves and after giving him our spiel, he insisted we go inside the Alaska Airlines plane which we appreciated but didn't dare follow through on.  I could just imagine, with my luck-  I 'd open the door to this antique plane, and it would rip off in the wind because I did not tie it down or latch it properly.  And I was not about to chance destroying such a masterpiece.   Instead we returned to the taxi way, looked inside every possible window and continued counting our laps.  Mike sensing our uneasiness eventually came to check on us, opened the plane up and insisted we get inside.  That Mike- he really rocks.


My opinion of Mike skyrocketed when he asked us if we wanted to climb into the cockpit of the Zero.  Hell ya I want to get inside the Zero!  Hardly able to control my excitement, I tried to listen carefully to his instructions as to the most graceful way to enter was.  Whatever.. who knows what he said.. step on the wing, hold here.. pull yourself up...  Before I knew it, I was in, sitting inside a notorious, once almost unbeatable Zero.  The same plane that my grandfather would have been dueling with. A tremendous privilege!

Early in WW2 the Zero, which was operated by the Imperial Japanese Navy, was nearly invincible.  In one of it's first appearances it shot down ninety nine planes while sustaining not a single loss of their own.  It left the air force world puzzled.  This plane, that seemed to appear out of nowhere,  was lighter, faster, more nimble and had a longer range than any other fighter ever seen before.  It was the cream of the crop and in the beginning of the war it controlled the skies.  That is until we could come up with a strategy to take it down which started to take shape by 1943. 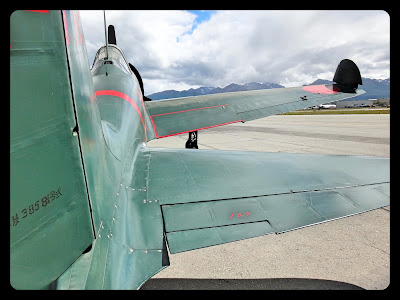 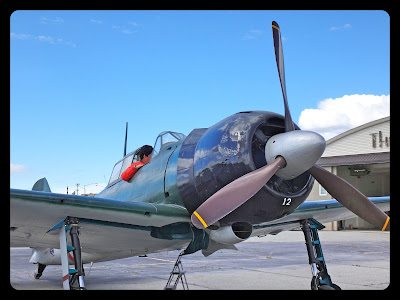 There several factors that contributed to the fall of the infamous Zero.  One of major contributors was the recovery of a downed enemy fighter that crashed in Akutan, Alaska on June 4th, 1942 flown by Tadayshi Koga.  The young 19 year old pilot could not recover from the ground fire that severed his main oil line and headed for the safety of what the Japanese had designated as an emergency landing area.   This emergency air strip turned out be be a bog and as the plane attempted to land, it flipped over, killed the pilot and was left virtually undamaged.
Under two weeks later, the Navy went back to recover the downed enemy aircraft loading it onto the USS St. Mihiel for San Diego where U.S. Army engineers would repair it back to air worthiness.  By September 20th, Lieutenant Commander Eddie R. Sanders took the Akutan Zero for it's first of twenty four test flights.   From these tests flights they were able to understand the enemy's strengths and weaknesses and devise an effective air strategy to gain control of the skies once again.

Of course, another valuable source of information was how the allied pilot himself encountered it in the sky.  Below is R.C.A.F. Squadron Leader, Kenneth Boomer's debriefing report of how he encountered and shot down a Japanese Rufe over Kiska Harbor on the very first fighter escorted bomber mission over Kiska.   For this mission, he plus three other Canadian Airmen were awarded the American Air Medal, my grandfather included.  One other Japanese plane was said to be shot down that day by Major Jack Chenneault, son of Major General Claire Chenneault.


The following is the Japanese Zero Fighter Aircraft tactics.  The following information was gained from an encounter, which took place outside Kiska Harbour in the Aleutians on the morning of September 25th, 1942.


It is recommended that this information be circulated and forwarded to Canadian Squadrons in any active theaters in which they are liable to encounter this type of opposition.


1. When the enemy aircraft were first observed they were flying at approximately 1000ft, in a loose echelon formation.  It would appear they were attempting to impress their maneuverability on the opposition as they repeatedly did slow rolls in series while approaching.  When within striking distance they separated slightly although still maintaining section formation, they wing man apparently acting as cover for the leader.   Unfortunately, the tow became separated and further section tactics could not be observed.  The leader dove straight at the leading P-40 seemingly attempting to bluff him into turning.  When this failed, and at approximately 200 yards he suddenly pulled straight up, half rolled and came down almost on the ail of the P-40.  At the  end of his pull out he was in a straight and level position and it was at that point that he was hit from two different angles and consequently went into a steep dive and crashed into the sea.  The pilot jumped out as approximately 100 feet, but was wearing no parachute of any kind.


2. After that half roll attack the enemy aircraft appeared to be firing with both heavy and light type armament, probably 20mm and .25 or .303 machine guns although the number of guns firing could not be ascertained.  The machine appeared to go to pieces easily with the return fire, indicating either light construction or very weak armour plating.


3. The second zero attempted either to climb away from an attack, or else into a favourable position.  His rate of climb was exceedingly fast and of a very steep angle, the aircraft appeared to be literally “hanging on it’s prop.”  At the end of his climb he also half rolled and after one misjudged attack on a P-40 disappeared from the observers view.


a) The zero fighter is extremely manourverable and can probably turn easily inside a P-40.


b) It has an exceedingly fast rate of climb and a very short pull out from a half roll.


c) Armament appears to be 20mm cannon plus light machine gun of an undetermined calibre.


d) The aircraft appears to be either of light construction of have little or no armour plating.


e) From a consolidated report of Japanese tactics in this theatre, these tactics appear to be standard and almost exclusively used.  The pilots appear to be both extremely daring and very well skilled in the handling of their aircraft.  Signed: (K.A. Boomer), Squadron Leader, Officer Commanding, No. 111 (f ) Squadron, RCAF Fort Glenn, Alaska


In a matter of hours I will be boarding a plane for Adak, Alaska to begin my 2016 WW2 Historical tour through the Aleutian Islands to honor the noble service, not only of my grandfather, but for all who served there to ensure our country was safe. Hard to believe the day is finally here. I hope I do them proud.