The site of this 1942 B-24D crash site sits on the northwest part of the historic island of Atka along the Aleutian Island chain.  The small mountainous island is situated just 90 miles east of Adak and has a long history dating back 2,000 years with Unangax^ as its occupants. Around 1747 the Russians discovered Atka Island and made it a primary trade site while forcing the Aleut people to hunt and process the skins of seals and sea otters only to benefit the wealth and position of the Russians. The townsite of Atka was officially settled in 1860.

As with the other Aleut villages along the chain of islands the arrival of the U.S. military meant the evacuation of its people to relocation camps in the Southeast Alaska - sent to dwell in dilapidated fish canneries in a temperate rain forest and an environment completely unfamiliar to its new inhabitants. Meanwhile Atka was burned to the ground to prevent Japanese from gaining any benefit. Nonetheless, Atka residents fared slightly better than most as the US Navy reconstructed their village after the war and residents were able to return along with other Unangax^ from villages deemed too remote or unsustainable by the powers that be - sadly including those from battle filled Attu. The war had significantly changed the lives of the Aleuts forever. Today, sixty-one people call Atka Island their home with most living on the southeast side of the island. 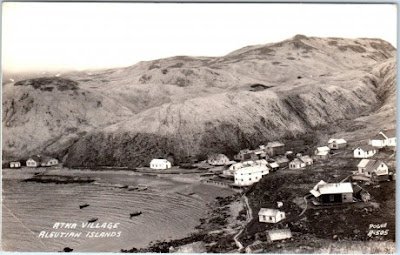 It was early morning December 9, 1942, when two pilots, Captains John Andrews and Louis Blau from the 404th Bombardment Squadron who were assigned to take high ranking officials, Brigadier General William Lynch and General Arnold's Inspector General on a weather patrol. They wanted to see and experience for themselves what the pilots of the 11th Air Force were having to deal with - and experience the elements they did.  Departing from Adak they flew to Attu to conduct reconnaissance on the Japanese occupation forces - and at the request of the generals extended their mission a bit too long. On the return, the once visible Adak airstrip had become completely covered in fog including the surrounding alternative island landing sites. With no improvement in conditions and running out of fuel the pilot radioed for the latest weather report and learned Atka Island offered a small window of opportunity for emergency landing by visual approach. As the Atka runway was not operational yet the options were narrowed to either bail out or crash land on the tundra.  After circling the island they found a level valley on the Northwestern side to glide the B-24D into.  After 150 rough and painfully noisy yards it came to a halt.  They all jumped out unharmed expect the bruised ego and broken collar bone of the General who had insisted on lingering over Attu.

Although this plane sits on part of the federally protected Aleutian Island World War II National Historic Area sites, it has been scrapped over the years with people helping themselves to whatever parts they wanted to needed.  Even so, it is still in great shape and has survived the harsh climate well.  As we approach and the fog envelops the steep slopes surrounding the valley where it sits, it acts as yet another example of the dangers that Aleutian Campaign pilots faced every day.