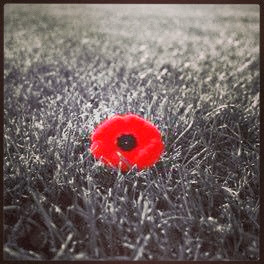 In Flanders fields the poppies blow
Between the crosses, row on row,
That mark our place; and in the sky
The larks, still bravely singing, fly
Scarce heard amid the guns below.

We are the Dead, Short days ago
We lived, felt dawn, saw sunset glow,
Loved, and were loved, and now we lie
In Flanders fields.

Take up our quarrel with the foe:
To you from failing hands we throw
The torch; be yours to hold it high.
If ye break faith with us who die
We shall not sleep, though poppies grow
In Flanders fields.

This well known poem was written by physician and poet Lt. Col. McCrae soon after performing the burial service for a friend who died in the second battle of Ypres around  Flanders, Belgium during World War 1.  He was inspired by the way poppies had grown so quickly around the graves of his fallen comrades.

If my Papa was alive today, I would give him the most heartfelt embrace and tell him how proud I was of his bravery and how grateful I was for the noble sacrifices he made so that we could live a better life. And truly, there are not enough words in existence  to express how deeply this gratitude runs.

In my opinion, veterans should be remembered every day not just on November 11th (hence me posting this on November 12th... smile).

Now, have you hugged a veteran today?  If not, you better.