After our morning in Anchorage, we headed 75 miles south down the Seward Highway then east along the Portage Glacier Highway port town of Whittier.   Well....what can I say about Whittier.... an interesting dynamic it has.  It is a very tiny town along the Prince William Sound with a population of about 177.   Yes- one hundred and seventy seven people small but packed full of history.  To get there you have to go through the Anton Anderson Memorial Tunnel also known as the Whittier Tunnel.  This 2.5 mile tunnel originally constructed during the years of 1941-1943 cuts through the Maynard Mountain and is the second longest tunnel in North America.  It's single lane accommodates both auto and railway traffic with directional flow controlled by two sophisticated computer systems.   What do you suppose they did way back in the 40's before the grand computer invention? Maybe a flag system?

There are a few things that make Whittier so unique.  It is probably most well know as a popular port of call for numerous Alaskan cruises.   Some extra inquiry and you will also discover that this small port town has a ton of history.  During WW2 the U.S. Army constructed a military facility complete with port and railroad. The town eventually became a secret entry point of U.S. Soldiers into Alaska.   Constructed during that time were two large buildings to house the soldiers.  These buildings pretty much make up Whittier.  They are enormous in comparison to the rest of modest town. 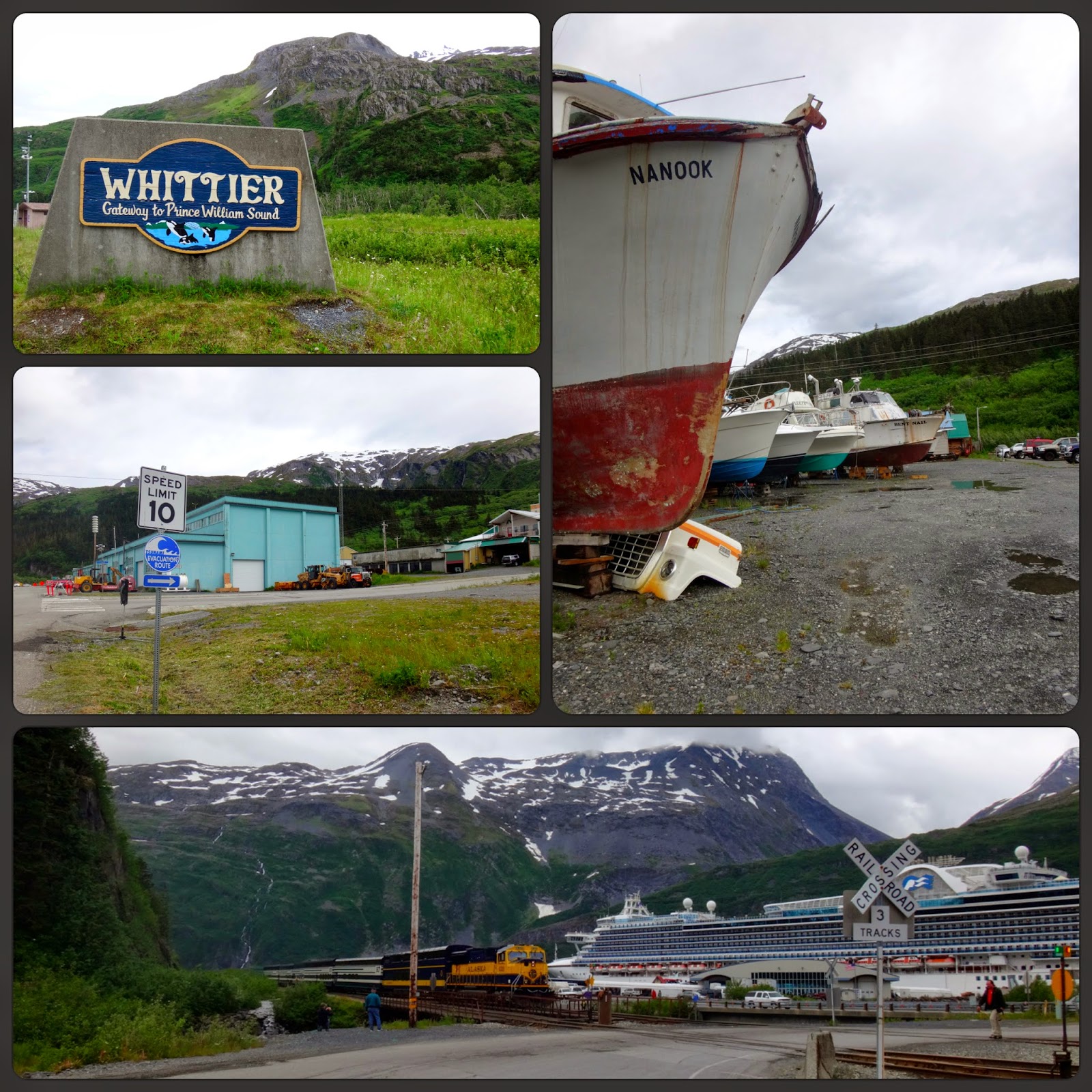 The one building- The Buckner Building was once the largest building in Alaska on its completion in 1953.  It was occupied by U.S. troops until 1960 when the Army left Whittier.  It has been vacant ever since.  Just another example of waste in war- a 14 story building, occupied for only 6 years then completely abandoned never to be lived in again.   Recently, the government owned building is now under consideration for either restoration or demolition.   Speaking only as a measly outsider, it would be nice to see something come of the building, if salvageable.   With the port and the breathtaking backdrop of the glaciers and the mountains, it makes for a perfect little piece of nordic paradise.

The other building- The Begich Towers, still functions as housing for a majority of residents who live in Whittier.  Interestingly, this building also serves as the city's business center.  The first and fourteenth floor are zoned commercial and the rest house many of the towns businesses including the police department and medical offices.   Of course you can imagine how convenient and warm this makes things for the residents living in the 196 units during the cold winter months.  There is even a tunnel that connects the towns only school of 37 little eager beavers of all grade levels.  Brilliant.

Amongst all this history and tucked away next to the town's convenience store and hotel is a superb little Museum- The Prince William Sound Museum.  This 1000 sq ft  museum is packed with some well done and interesting 22 exhibits that outline Whittiers unique history including displays about the Cold War and WW2 as well as the 1964 Earthquake that destroyed much of the towns lumber trade.  With it's $3 adult admission and its proximity to the ever so busy cruise terminal, it is well worth your while to visit. If you want to learn more about Whittier start watching my new favorite show, a Destination America series titled Railroad Alaska where Whittier is one of the shows featured towns.   It's  an Alaskan town of laid back but hard working, down home good all around people.  My kind of place... well with one exception, brrrrrr.