AK905- Needle In A Haystack

I used to think that finding an aircraft that my grandfather flew during the war would be the pinnacle of this journey so when we found the first one, AK875 currently painted like a Fighting Tiger (aren't they all??) at the entrance to the Smithsonian's Udvar-Hazy Center,  it was almost too good to be true.  Seriously- of all the places for it to wind up, it had to be at one of the most prestigious aviation museums in the country?  Can it get much better?  I didn't think so.  That is until I got word of a second one...

That discovery came just days after returning from Washington to see the first one.  Some random email from someone I didn't know appeared in my inbox letting me know of a P-40E (AK-905) that was still around.   This one though, was still air worthy!!  Ohhh baby,  the level of excitement at that moment could not have been measured.  After doing some research to confirm the accuracy, I immediately emailed the owner, introduced myself and attached a photo of my grandfather sitting in the plane in 1941.


They were equally thrilled to hear from me because just as it is rare to find a family member's plane from the war, it is equally as rare for warbird owners to find their plane's original wartime pilots.  To put it in perspective,  the Smithsonian's Air and Space Aeronautics Department chair told me he can count on two hands the number of times they have been able to make a personal connection to one of their aircraft.  And he's been there 30 plus years with thousands of aircraft in their collection.   Actually, the Smithsonian Air and Space collection ranks as the largest collection of aircraft on display in the world!  So yeah, rare.

Part of the challenge of reuniting pilots with planes is that so many of the planes were lost during the war and if the machines were lucky enough to make it through, the aircraft were hastily sold or scrapped shortly afterwards.  A horrifying thought for restorers or aficionados now a days.   Couple that with the fact that many airmen do not have their logbooks anymore so determining which aircraft they flew becomes even more difficult. Fortunately for me, my grandfather was a meticulous record keeper and kept both of his flight log books; a good copy with photos and notes and the one he went to war with.  This book has become my war bible of sorts, I reference it constantly.   And because of that book we have miraculously been able to find THREE of the aircraft him and his squadron flew during the war!    Truly astounding. 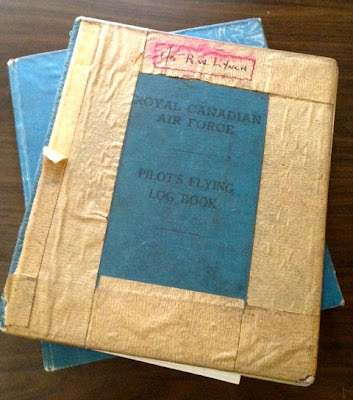 The current owner of AK905, as I call it,  is the none other than the aviation pioneer Rudy Frasca (Frasca International- Flight Simulators) and I could not think of a better family to have it!  It is immaculate (although painted, again.. like a Fighting Tiger).  Rudy is an aviation legend and his name sits on the Smithsonian's Air and Space Hall of Fame wall recognizing his enormous contribution to the development of aviation over the last 60 years.   He purchased the Kittyhawk near his hometown in Illinois in 1976 and it has been his pride and joy ever since bringing it regularly to Air Venture air show in Oshkosh, Wisconsin.  Rudy has been an active member of EAA's Warbirds of America since it's inception and at the suggestion of his son David, who now flies the plane, we were invited to participate in this year's Warbirds In Review session dedicated to the P-40 and it's contribution during the Aleutian Campaign.  You can watch that session by clicking the link below the second photo. What an honor to be part of and to represent those who flew in the most treacherous and unpredictable of airspace around- the Aleutian Islands.

After it's service with the Royal Canadian Air Force in Alaska (1941-1946) AK905 was struck off strength and by 1948 was for sale by Walter Motor Harris Dealership near Champion, Alberta.  It was one of fifteen Kittyhawks available.  A lucky Albertan named Bob Wardon scrounged up the $150 they were asking for it and using an old military jeep, towed the Kittyhawk back to their farm where they slowly starting working on it finally getting it back up in the air in 1962.

In the early 1960's, the P-40 flew in airshows around the area even making an appearance at the Abbotsford Airshow, the largest air show in Canada.   In 1968,  the Wardon's sold the Kittyhawk to Bill Ross from Chicago who owned it from 1968-72.  It then sold again to Don Plumb from Ontario who did a lot of restoration work on it from 1972-1976 only to sell it to a fella from Colorado named Max Hoffman who turned around and sold it finally to Rudy Frasca where it still lives today.

What a gift my family has been blessed with.  I still have to pinch myself.  It is one thing to have it hanging on static display in one of the best aviation museums in the world.   But it is a whole other experience to be able to hear the roar of the engines, smell the burning of the fuel,  see it speed past you and ultimately touch the controls of the very same aircraft your loved one went to war in.  Quite surreal.

I have to give enormous props to the Frasca family.  They have been such a blessing welcoming me anytime to come and visit the plane.  I get to sit in it like it is my own and most of all- I get to share it's story of how it once served to defend this continent.

In keeping with my mission, this blog is not just about my grandfather, it is also about those he served with.  To this date, here is a list of some of the other Royal Canadian Air Force 111(F) Squadron pilots who also flew AK905 in Alaska during the war.   This plane lives on in their honor as well.