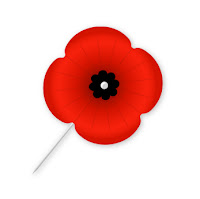 So I have been asked to speak at a Veterans Day ceremony this Friday. I hardly seem worthy of addressing those who were brave enough to risk their lives for my freedom. I thought long and hard about what I would say. I finally decided that I would try to embody what my grandfather would have wanted to say about his time spent in war.

"I stand up here today hardly feeling worthy of this opportunity to be in front of the many courageous war veterans that are in the audience. For I know that I do not have the same bravery. I am in front of you to speak on behalf of my Grandfather, Robert W. Lynch, a WW2 war veteran.    I know he had things to say and never found it within him to share them. So with God's help,  I will try my best to convey to you the story he always wanted to share.

My Papa, as I called him, was born in Winnipeg, Manitoba, Canada in 1922.  It was June, 1941 when my grandfather joined the Royal Canadian Air Force. It is unknown to me what motivated him to join the air force although I do know now how much he loved flying. He graduated top of his class as an Officer, which is a Lieutenant in American ranks.

On June 6th, 1942, the Japanese bombed the city of Dutch Harbor in Alaska just six months after Pearl Harbor and one day after the battle of Midway. Days later, the enemy occupied the two most westward islands along Alaska's Aleutian Island chain, Kiska and Attu. And that began what is now known as the 'Forgotten War', the Aleutian Campaign.  The war in Alaska was the only WW2 campaign fought on North American soil and the first time that US soil had ever been occupied by the enemy. As part of the already established Pacific Joint Agreement on Defense, two Canadian Air Force squadrons, and eventually a third, were mobilized immediately and sent North to help the Americans defend this great continent.

My grandfather, F/L Lynch, was a P-40 fighter pilot, with the RCAF 111(f) squadron, the first Canadian fighter squadron sent North to Alaska. War in Alaska was like no other due to its remote, harsh and treacherous environment, especially for the pilots, who often times, encountered intense and spontaneous fog leading to zero visibility. The troops slept in tents or Quosnet huts in sub zero temperatures, had to wait months for supplies, food and mail that were delayed by the brutal weather conditions. Actually, the Aleutian campaign is known to have lost more troops to its climate then to the battle alone, resulting in the highest American combat to operational loss ratio of the war.  But in my grandfathers words "Living in tents on Umnak can not compare to the Chateau Laurier, but we made the best of it."  They did what they had to do.

My grandfather was stationed there for a year and on December 25th, 1942 was awarded and American Air Medal for his participation in a bombing mission over Kiska where one enemy zero was shot down. He was one of only 11 Canadians to receive an air medal during that campaign.  He was extremely proud of his time served.  Fortunately for our family, after the campaign was over, he went on to become an RCAF flight instructor and helped prepare other pilots to go overseas.

Lastly, I share with you, a statement that motivates me on my own personal journey to tell the Aleutian story with as many as I can.  This is the closing statement written by my grandfather to a historian at the Canadian Department of Defense that sums up how he and many other Aleutian Island veterans felt:


" Morale in the squadron was always high because we were a proud group with good officers and excellent men.  I must say that my service in the 111(f) Squadron is an experience I wold not have missed. I feel that the Aleutian Campaign is a forgotten item in history and I am happy and appreciative you are doing something about it."