Kodiak. Mine To Explore.

Something about the pureness of the Kodiak air is what I attribute my log like sleep to despite it being just as light out when I woke up, as when I went to bed.   Beth, my hostess, at Mrs. Potts Bed & Breakfast laid out my morning coffee the night before which suited me perfectly as I usually rise before the hens.  Besides, my solitude in the morning is usually in everyone's best interest.  I sat quietly reliving the previous day and began a very fluid plan for my first full day in Kodiak.   In keeping with my desire to get the most authentic experience of a town, my day consisted of simply wandering the streets, checking out a few museums, and hanging out around the fishing docks. Of course, all in the typical Kodiak rain.

I began my day with a trip to the historic Baranov Museum.  This museum is located in the National Historic Landmark building known as the Erkstine House.  They specialize in Alaska's Southwest Russian Era (1741-1867) and early American Era (1867-1912).  Yep. Russia.  In 1763 the first Russian explorer discovered the island and its Alutiiq inhabitants and named it Kad'yak. A decade and a half later, 1778, Captain James Cook set foot on the soil and renamed it Kodiak.  And in 1791, Russian fur trader Baranov laid roots on the island, in the form of a fur trading depot, with its warehouse in the very same Baranov Musuem located in the area that still makes up the core area of Kodiak as we now know it. 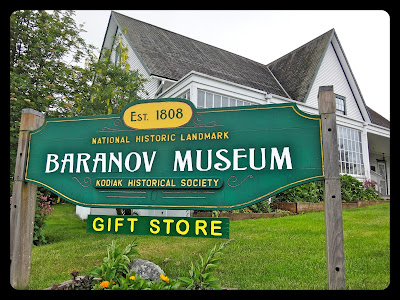 The Museum was super. A must.  Surprisingly, even though Kodiak has some strong WW2 roots, it had very little information displayed.  On a shelf in a hallway,  sat an assortment of photo albums available for browsing.  One of the gals working there helped me scour through them with hopes of finding out a more precise location of where Fort Greely was for tomorrows excursion.

Fort Greely was a joint operations base used during WW2 that has since been completely demolished and pretty much forgotten about.  In fact, no one at the museum or even my tour guide, really knew where exactly it was.  During the war, it was home to the only fighter squadron ever stationed on Kodiak Island, the R.C.A.F. 111f Squadron.  Besides Fort Greely, there were a few other bases on the island; Chiniak Point- Miller Air Field, about an hours drive away, Fort Abercrombie to the west, which is now a state park and a U.S. Naval Base, now one of the largest Coast Guard Stations in the country.  In present day, all that is left of Fort Greely and Miller Air Field are the cement pads in which the buildings sat and a cleared linear area which was once the air strip.  Rumor has it, that if you were to hike through the bush you would uncover all sorts of war artifacts left behind.  Well noted for the next trip... The Baranov assured me that a remodel was in it's future; a remodel that included a WW2 display.  Which reminds me, I need to check back in with them regarding this matter...

Although I was most interested in it's WW2 past, it was still neat to learn the history behind the place many people fall in love with.  Mostly due to it's geography and the Pillar mountain range that follows the coast line near the harbor, the core of downtown Kodiak is more wide than long. Only about 4-5 blocks north to south and 6-8 blocks east to west.  Sure made it easy to orient yourself when looking at old historical photos.   The town has one Walmart, which was somewhat disappointing to see. Big business infiltrating even the most pristine, nearly untouched towns.   Towns where the local business owners rely on... well... local business.  Primarily though, Kodiak is a fishing town filled with numerous harbors and a lot of guys in rubber pants, good down to earth people, a ton of wild life and a lot of history.   Some of the Deadliest Catch boats dock here during the summer fishing months.  No sign of them on my trip though- guess they were out bringing home our dinners- crab, halibut, cod, rockfish, to name a few of the fish that frequent the surrounding waters.

The rest of my day consisted of one more museum stop;  the Alutiiq Museum, a lot of aimless wandering,  pit stops at the local watering holes and dinner at the old Power Plant turned Sushi restaurant with the nice lady, Barb, who gave me a ride to my B&B the day before.  Kodiak- it is great to meet you.